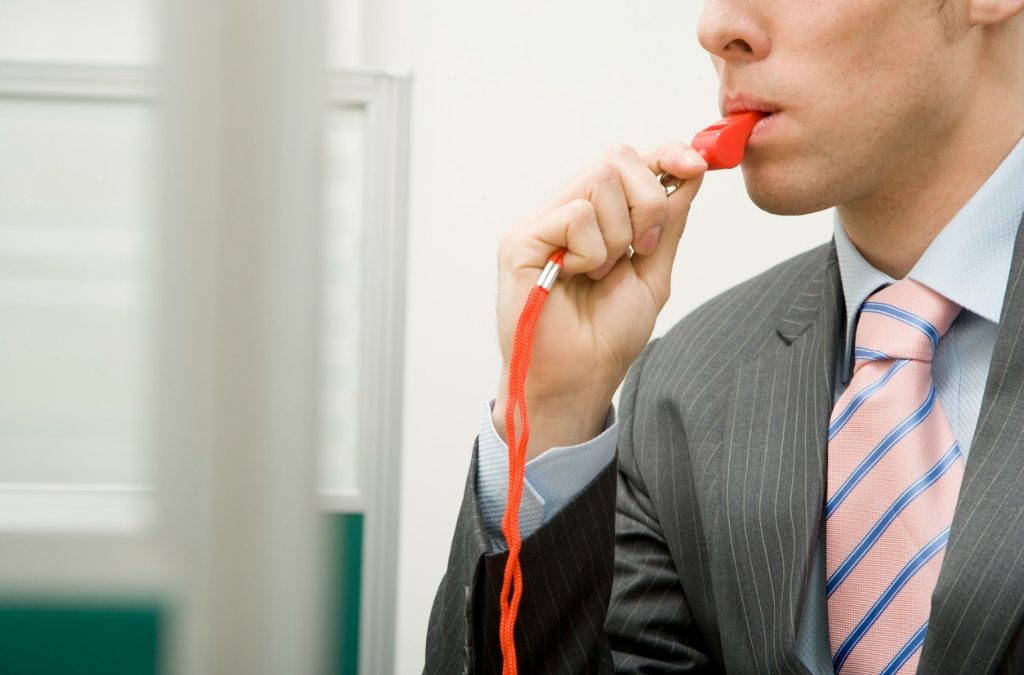 Whistleblower cases filed with the United States government increased from 30 in 1987 to 674 in 2017. This number continues to rise, showing that whistleblowers are at the forefront of the struggle to reveal the waste of resources caused by organizational misconduct.

Whistleblowers are individuals who report activity or information within a private, public, or government organization that is judged to be unlawful, dishonest, hazardous, or a waste or misuse of investors’ or taxpayers’ money.

Whistleblowers who disclose such activities to company managers, civil or law enforcement officials, or judges and juries through lawsuits provide a great service to society by exposing, halting, and penalizing government agency and corporate wrongdoing.

Being a major tool in combating illicit or fraudulent behavior in business and government, whistleblowing is a praiseworthy act that requires a strong sense of honor and duty, as well as great courage.

However, a sense of honor and moral duty is not the only incentive that leads whistleblowers to overcome their apprehension and expose corporate or agency misconduct. The more mundane and tangible lure is the potential monetary reward.

In some cases, whistleblowers may be entitled to compensation from the authorities for having provided facts on misdeeds performed by a company or government group.

For instance, if they perform protected whistleblowing acts, whistleblowers may receive financial compensation if their employers take action against them, generally by downgrading their position in the company or by outright termination.

In fact, if an employer violates certain legal safeguards related to reprisals against whistleblowers, the company may be required to remedy the situation through job reinstatement, payment of the whistleblower’s legal fees, and provision of all back pay accrued by the whistleblower if he or she was terminated.

Whistleblowers Should Not Anticipate Becoming Wealthy from Lawsuits

Under the False Claims Act, originally enacted in 1863, private U.S. citizens who become aware of government fraud can file whistleblower lawsuits on behalf of the government and may receive a percentage of the money recovered by the suits. Such cases are known as qui tam lawsuits.

The term qui tam is derived from a Latin expression meaning “one who files a lawsuit for the king and for himself.”

The amount of money awarded in such lawsuits can be sizable, but qui tam suits are accompanied by specific conditions, precise time limits, and legal fees, so they may not be as lucrative as they appear on the surface.

Thus, it is possible for whistleblowers to be vindicated and remunerated for their acts of disclosure. However, in the past, whistleblowers who acquired portions of the recovery fund resulting from their lawsuits reported issues such as the following.

The Psychological Effects Can Also Be Devastating

In addition, the financial setbacks that result from being a whistleblower can have a negative impact on a person’s self-worth and overall sense of well-being.  Some have to resort to the following measures to make ends meet.

Many also seek help through psychological counseling to cope with their situation and to readjust to society after losing their jobs and going through protracted lawsuits related to their whistleblowing actions.

All of this can be extremely embarrassing and debilitating for individuals and their loved ones, so it is important to think long and hard before deciding to become a whistleblower.

Being a Whistleblower Has Other Downsides

Despite the moral satisfaction and financial rewards that some whistleblowers experience, many face repercussions, retaliation, and negative effects such as these.

Studies show that approximately one in five whistleblowers suffers these types of outcomes of their actions and that roughly 84% go public with information about wrongdoing only after they first try to report it internally.

When employers learn that issues about company misconduct are being raised, whistleblowers often face the aforementioned consequences.

Recommended Read The Risks and Benefits of Whistleblowing

As whistleblowers attempt to come forward, they frequently encounter silence and antagonism on the part of management. Due to such treatment, some whistleblowers experience constant overpowering anxiety, drug and alcohol issues, paranoia while in the workplace, nightmares, and unwelcome thoughts.

Depression is also a concern for whistleblowers, along with suicidal thoughts and the deterioration of overall health and self-care. The array of symptoms experienced by whistleblowers shares many of the characteristics of post-traumatic stress disorder, though their severity may not be as great.

Higher levels of stress-related illness have also been observed among whistleblowers. The stress resulting from the act of blowing the whistle can be intense, so employees are often afraid to take action, fearing that they will not be believed or that speaking out will have no positive effects.

In light of the many challenges they could face after disclosing wrongdoing in the workplace, potential whistleblowers need to make well-informed and thoughtful decisions before committing themselves to the long, difficult path they will need to follow after reporting organizational misdeeds.

Those who counsel potential whistleblowers typically try to talk them out of the idea to help them understand what they may be getting into and to determine if they’re equipped to follow through on their disclosures and face the possible emotional and financial consequences.

In the final analysis, acting as a whistleblower and dealing with the aftermath can be a risky, stressful, protracted, and possibly life-changing process. If you do decide to go through with blowing the whistle, it is important to realize that you are not alone!

Whistleblower Info Center is powered by a team of whistleblower attorneys that is well-versed in all facets of whistleblower law. We can provide you with guidance and advice on what to do next. If you have any inquiries, email us at support@whistleblowerinfocenter.com or give us a call at (888) 764-8645.